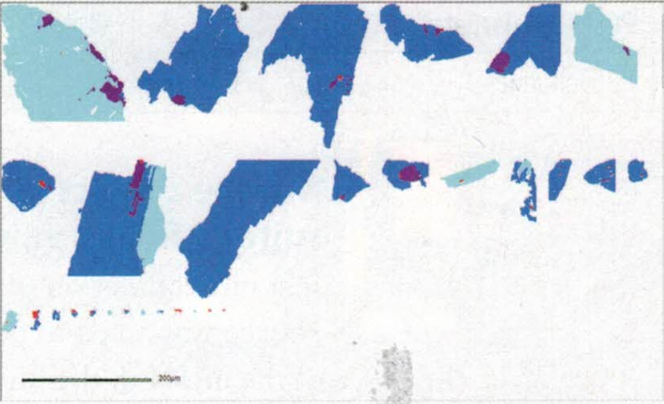 In the Betachem/Nasaco process mineralogy laboratory in Johannesburg, the team develops chemical solutions to the standard problems of poor concentrate grades. Client samples are scanned using one of the lab’s three A-SEM units (MLA from FEI). Gangue minerals are identified and particle size measured. Treatment methods are then suggested with reagent testing as appropriate.

Gangue locked in valuable mineral
In Fig 2. this polymetallic flotation plant was producing poor zinc concentrate grades. 57% of the dolomite gangue is locked in the sphalerite grains. The only way to improve this situation is to adopt a regrind step to liberate the spaherite prior to recleaning.

Recovered as entrained fines
It is important to minimise Cr content in flotation concentrate in South African UG2 Platinum flotation operations. In this concentrate the Cr is present as chromite and 92% of the chromite is fully liberated. 73% is smaller than 10 micron and 20% is in the 10 to 212 µm fraction. The problem was improved with the choice of a different collector and specific depressant.

Recovered as larger particles in a non-draining froth
A gold flotation plant floats pyrite to recover the gold locked in the pyrite. The concentrate is leached to recover gold. The volume of concentrate needs to be reduced to increase leach residence time. Quartz was found to be the main gangue mineral, was well sized and liberated. Changing the frother gave a more mobile drainable froth and reduced the gangue content in the concentrate.

Other reasons, which may include process efficiency
A South African UG2 reef PGM flotation plant experienced poor concentrate grades. MLA analysis showed that 83% of chromite was present as well sized liberated particles. This was a recent phenomenon as earlier analysis had shown 33% being present as such. It was concluded that the process was out of balance and steps were taken to control process flows which resulted in a return to normal levels of Cr in the flotation concentrate.